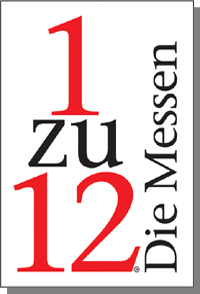 "I had been looking forward to this fair for such a long time, my expectations were completely satisfied, it was a wonderful weekend, but unfortunately now it takes a whole year until the next 1zu12!" This was said by a visitor after the premiere of the 1zu12-miniatures' fair in the summer of 2000 and described the feelings of most of the country's dolls house and miniatures' fans. Since then, every year they await the next 1zu12-fair as excitedly as children before Christmas, curious for all the wonderful novelties the international miniatures' market has to offer.

Well-established from the start, 1zu12 - Die Messe has constantly developed for the last years in a very pleasing way, and by now has been one of the biggest and most famous trade shows for the miniatures' hobby worldwide. The number of exhibitors, which has grown from 70 to now more than 200, proves that fact, but also made it inevitable in 2011 for organizer Barbara Leuchtenberger to move the fair from its former venue at Soest to the A2 Forum at Rheda-Wiedenbrück.

This modern commune consists of the two pretty, typically Westphalian districts Rheda and Wiedenbrück. It is only about 20 miles northwestern from Soest, but with the exhibition centre A2 Forum, which is placed directly next to the autobahn A2 (Dortmund-Hannover), it offers more ideal circumstances for a modern continuance of the 1zu12-fair's positive history of development in front of a new setting.

In May 2011, the new venue was accepted very well by the visitors as well as the participating exhibitors and praised throughout as a "good choice". You can look up all of this year's participants in the current exhibitors' index.